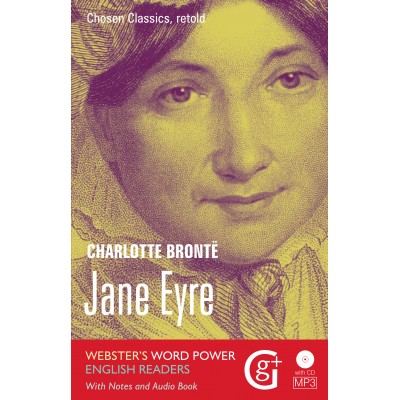 Jane Eyre by Charlotte Brontë (1816–1855) is the story of the life of a young woman, an orphan, who has endured many hardships. She is passionate and emotional, and she has romantic dreams of a better life. Jane is likeable and moral, and a little rebellious.

This story has been adapted for television, film and theatre many times and once you start reading you'll find out why. It is a very eventful tale, with dramatic (and sometimes tragic) twists, some secrets and lies, and a seemingly impossible romance at its core.

Mr Rochester is the dark and possibly dangerous male protagonist with whom Jane quickly falls in love. Is he in love with Jane too? And what is the secret concealed at his home Thornfield Hall?

In this edition the story of Jane Eyre is abridged. That means it is shortened and simplified to make it easier to read. The key characters and storylines are preserved. There is also some historical information about the time and about the author, and a glossary of the words and phrases that were common in Victorian times but are unusual now. There is also a summary of the plot that may aid study.

This classic novel is ideal for ELT and also young people with English as their first language, as a graded reader ideal for aged 13+. It will be of great interest particularly to those interested in Victorian novels and classic literature. It is suitable for adults who are learning English. The book contains a simple glossary and notes. In addition, there is a CD of the story, so you can listen to it again. This book is graded as B1/2, so some knowledge of English is needed.

About the Author:
Charlotte Bronte was the eldest of the remarkable Brontë sisters, who were all poets and novelists. Born on April 21, 1816, she grew up with her sisters and brother amid the bleak moorlands and hills of Yorkshire, in the north of England. She lived in the rectory at Haworth near Keighley where her father was curate for forty years.

She was educated at home but later spent one year with her sisters in the Clergy Daughters’ school at Cowan’s Bridge. Their unhappy experiences there, as a result of poor food and harsh discipline, were afterwards vividly brought to life in Jane Eyre.

She published Jane Eyre under the pseudonym Currer Bell. At that time, she felt her work would be treated more seriously if she used a male Christian name. She taught for some time in Brussels and used these experiences in her novels The Professor, and Villette. Charlotte Bronte married, but died while she was pregnant, aged thirty-eight.

This book was adapted by John Kennett, and was first published by Blackie. Kennett felt many people were missing out on some great stories as the original books were too long, and people had less time to read than when the books were first published. He set out to shorten the novels. He retained the most important and vital parts of the story, and hoped readers would go on to read the original later.