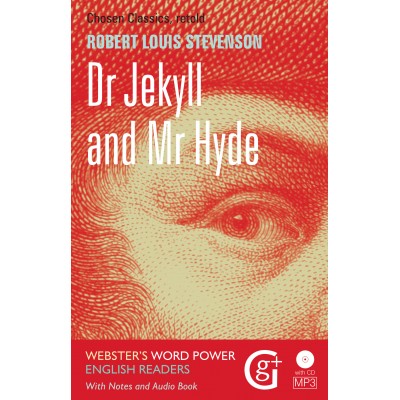 Robert Louis Stevenson's Dr. Jekyll and Mr. Hyde is a genuinely chilling tale of the struggle between good and evil.

Lawyer John Utterson sets out to uncover what the connection is between his friend, the brilliant scientist Dr. Henry Jekyll, and a brooding, trouble-making stranger called Edward Hyde; a man whose appearance is so strange that all who look upon him shudder ... without quite knowing why.

This horrifying story – adapted here for the Word Power English Reader Series by John Kennett – has an extraordinary energy, from its intriguing beginning to its thrilling climax.

The original title of Stevenson’s novella, first published in 1886, was The Strange Case of Dr Jekyll and Mr Hyde. Most critics argue that it was completed within a few days of frenzied writing, and it certainly reads that way. It is an extraordinary story told at a gripping pace.

Robert Louis Stevenson was a novelist, essayist and poet. He was born in Edinburgh, Scotland, in 1850. Although he never enjoyed good health, he travelled widely. His final home was in the tropical island of Samoa, where he died in 1894. His poems for children are collected in A Child’s Garden of Verses. He wrote many popular adventure novels that include Treasure Island, Kidnapped and The Black Arrow.

This book was adapted by John Kennett, and was first published by the publisher Blackie. Kennett felt many people were missing out on some great stories as the original books were too long, and people had less time to read than when the books were first published. He set out to shorten the novels. He retained the most entertaining and vital parts of the story, and hoped readers would go on to read the original later.