You are here:Home|English Classics - readers|Around the World in Eighty Days: Chosen Classics Retold with Book, Notes and Audio Book (MP3)

Around the World in Eighty Days: Chosen Classics Retold with Book, Notes and Audio Book (MP3) 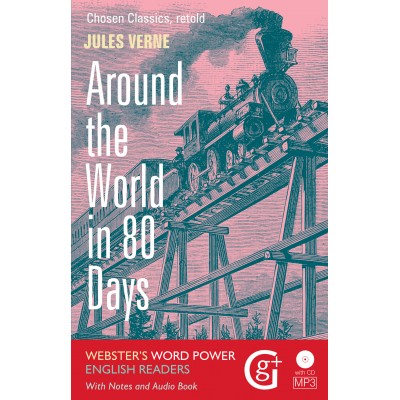 Featuring the world-famous characters Phileas Fogg and Passepartout, Around the World in Eighty Days is an exciting, fun story, adapted many times since publication into films and dramas. This retold edition is more simply told than Verne’s original novel but it is no less exciting.

Phileas Fogg, an English gentleman, makes a fantastic trip as a bet. His adventures, with his French manservant Passepartout, by railway, steamship and elephant, see him travel around the world pursued relentlessly by a detective who mistakes him for a notorious criminal.

This classic novel is ideal for ELT and children with English as their first language, as a graded reader ideal for aged 8+. The grade is level B1/B2, so some English is needed to understand and enjoy this book.

It is of universal appeal, and is a timeless story that will entertain and fascinate. It is suitable for adults who are learning English, looking for an amusing and gripping read. The book contains a simple glossary and notes. This book comes with a CD of the story, so you can listen to it again. Graded reader level 2.

About the Author:
Jules Verne was born in Nantes, France in 1828. He studied and practised law for some years before he wrote his first adventure story in Paris in 1862. From that time he wrote almost at the rate of a novel a year until his death in 1905. It has been said that his books are dreams come true, because he described in them the wonders of modern invention – such as submarines, aeroplanes, and television – long before they became realities.

This book was adapted by John Kennett, and was first published by Blackie. Kennett felt many people were missing out on some great stories as the original books were too long, and people had less time to read than when the books were first published. He set out to shorten the novels. He retained the most entertaining and vital parts of the story, and hoped readers would go on to read the original later.