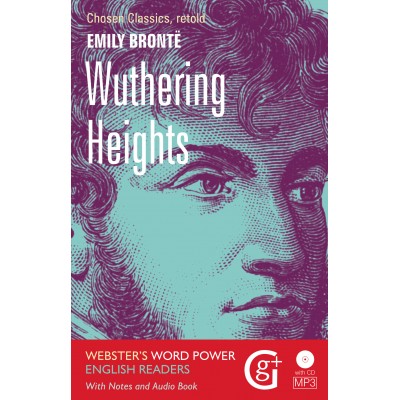 Emily Bronte’s novel Wuthering Heights tells the story of the ill-fated love of Catherine Earnshaw for the dark and brooding Heathcliff. It is one of the most passionate novels written in English literature.

Set on the bleak Yorkshire moors in the north of England, the story tells of Heathcliff’s revenge against Catherine’s husband, and his sister, but ends with the hope of redemption through the next generation. This novel was the only one written by Emily Bronte, and when it first appeared the book's reception was controversial, as it challenged Victorian ideals of morality, social hierarchy, and the position of women in society. Today it is judged to be one of the greatest novels ever written.

This classic novel is ideal for ELT, and for young people with English as their first language, as a graded reader ideal for age 12+. This is a story of universal appeal – passionate and timeless. It is suitable for adults who are learning English, looking for a strong story. The book contains a simple glossary (to explain difficult words or dialect), and notes on the story and characters. In addition, there is a CD of the story, so you can listen to it as well as reading it.

About the Author:
Emily Bronte was the middle sister of the remarkable Bronte sisters, who were all poets and novelists. Born in 1818, Emily was brought up with her sisters, Anne and Charlotte, and her brother Branwell, in their father’s parsonage at Haworth, on the edge of the Yorkshire moors. These moors provide the powerful setting for Emily’s only novel, Wuthering Heights. This book is considered by many to be the most passionate and original novel in English literature. It was published in 1847, the year before Emily’s death at the age of thirty.

This book was adapted by John Kennett, and was first published by Blackie. Kennett felt many people were missing out on some great stories as the original books were too long, and people had less time to read than when the books were first published. He set out to shorten the novels, and to retell them. He retained the most entertaining and vital parts of the story, and hoped readers would go on to read the original later.