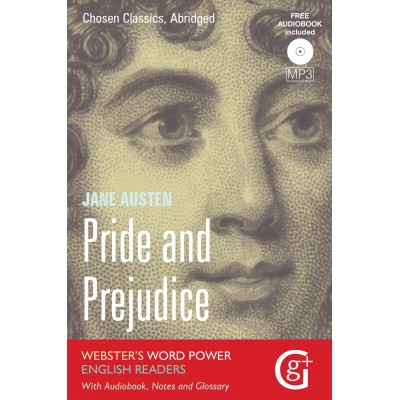 PRIDE AND PREJUDICE WITH AUDIO

Jane Austen's Pride and Prejudice is an insightful and funny tale of manners and misunderstandings. It was published in 1813, a time when it was of the utmost importance for a woman to find a wealthy husband to ensure her future economic security.

When a handsome and eligible bachelor – Mr Bingley – moves into nearby Netherfield Park, the Bennet sisters and their excitable mother are keen to make his acquaintance.

The book's witty heroine, Elizabeth Bennet, and the handsome but distant Mr Darcy, are two of the most popular characters in Western literature.

At a ball at Netherfield – while Elizabeth’s older sister Jane and Mr Bingley are falling in love – Elizabeth meets the wealthy young Mr Fitzwilliam Darcy. Darcy is cold, rude and proud, and it is dislike at first sight.

Lizzie prefers the charming Mr Wickham – who also happens to be the godson of Mr. Darcy's father. But, as the young people succumb in many ways to pride and prejudice, Lizzie learns that not all is quite as it seems ... and that Mr Darcy might be more agreeable than she first thought.

In Jane Austen’s time, a social hierarchy in English society governed what one could say or do. Social rank determined one’s social class and whom one could marry. Pride and Prejudice is an entertaining, skilfully written novel written with ironic observation of social behaviour and stands up today because of Austen’s storytelling, wit and phrasing, and humour.

This edition of Pride and Prejudice contains a retold novel, an introduction, notes on Jane Austen, notes on the Regency period, the book’s themes, a simple glossary, and a free CD (running time 2 hours). The book on the CD is read slowly and clearly to aid comprehension.

About the Author:
Jane Austen (1731–1805) was an English author who wrote six novels. She is revered around the world and has millions of fans.
Her books have been made into plays and films. She set her novels among the landed gentry.

This book was abridged and retold by John Kennett. He felt many people were missing out on some great stories as the original books were too long, and people had less time to read than when the books were first published. He set out to shorten the novels but he retained the most entertaining and vital parts of the story, and hoped readers would go on to read the original later.