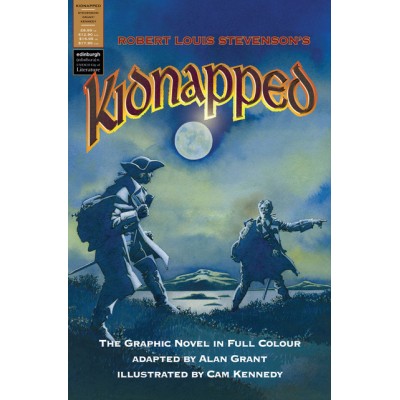 This adaptation of Robert Louis Stevenson’s Kidnapped, a dramatic and epic adventure story about a 17-year-old desperate to secure his inheritance, culminating in a chase from the islands in the west of Scotland to Edinburgh, brings together two creative giants from the world of the graphic novel, as the absolute ‘dream team’ – artist Cam Kennedy, and scriptwriter Alan Grant.

Kidnapped is set in 1751, during the time of the Jacobite rebellion – a tumultuous and tragic period in Scottish history. When David Balfour sets out to find his uncle, he never dreamed his path would lead tosuch exploits – that he would discover that a fortune was rightfully his – that he would narrowly escape being murdered – that he would be kidnapped, but saved from a life of slavery – and thrown from one escapade to another in the company of the fugitive masterful swordsman Alan Breck Stewart.