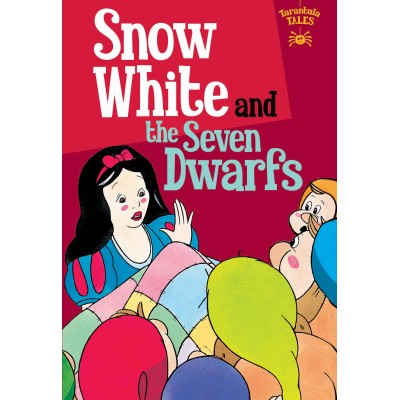 But one day when the stepmother looks into her magic mirror, the mirror says there is a fairer one than she, and the queen knows it is Snow White. In a rage, the queen orders a huntsman to kill Snow White, and to bring her the heart. However, the huntsman takes Snow White into the woods to hide and brings instead the heart of a deer to the queen. Meanwhile, Snow White finds a sweet little house, and once she has tidied it up, and found seven pairs of little shoes, and seven little pickaxes, Snow White falls asleep. She wakes up to find seven dwarfs staring at her. The seven dwarfs are very friendly to Snow White, and she stays on as housekeeper for them. The house is full of laughter. But back at the palace, the queen is staring at her magic mirror, and the clever mirror tells her Snow White is living in the forest. The bad queen now dresses up as an ugly old woman, and knocks on the door at the dwarfs’ house. Snow White opens the door, and unknowingly takes a bite from a rosy red apple that the old woman offers her; the apple is poisoned. Snow White falls into a deep sleep and is placed into a glass coffin, and the dwarfs chase the queen, who falls to her death. But don’t worry – Snow White’s life is about to change, as a prince is about to pass by.

This famous fairytale is German in origin and was published by the Brothers Grimm. The story was made famous by the first animated film from Walt Disney in December 1937 who named the dwarfs. An earlier version by Grimm told it as the king’s wife, Snow White’s mother who was jealous of Snow White, but the story was changed to make it a stepmother, to tone it down for children. There are similar older fairytales in history in Russia, Albania and Armenia.